Westons Stowford Press Cider has launched a new TV ad, which features the brand’s new strapline for the first time, of “100% local home-pressed apples”. The £1.5m TV ad forms part of Westons £2.5m investment into the brand this year.

The new TV ad, which was developed by McCann Bristol, will launch and air on Channel 4 until September and includes a 30-second and 10-second version. Filmed entirely at Westons Cider Mill and the surrounding Westons orchards in Herefordshire, the ad follows the journey of Stowford Press Cider from apple blossom through to the glass. The aim of the ad is to bring to life the authenticity of the Stowford Press brand and hero the new strapline, “100% local home-pressed apples”.

The new strapline will also feature across all Westons packaging from September, including its 500ml can and bottle formats as well as new Stowford Press drip mats in the on-trade. A new watermarked apple design will also feature across the 500ml bottle and can. The new strapline will also be introduced across all Stowford Press glassware from September, as well as a new pint and half-pint glass shape.

Phoebe Small, Stowford Press brand manager, says: “We are extremely excited to be announcing our raft of summer activity, which all comes under the new strapline of “100% local home-pressed apples” and reminds consumers that all apples used in Stowford Press Cider are locally sourced to the Westons Cider Mill in Herefordshire.

Westons Cider is now run by the fourth generation of the Weston family, which has been producing traditional English cider in the Herefordshire village of Much Marcle since 1880. 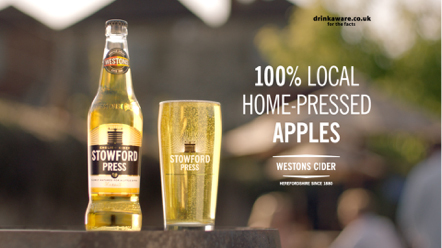