Thatchers on board HMS Somerset 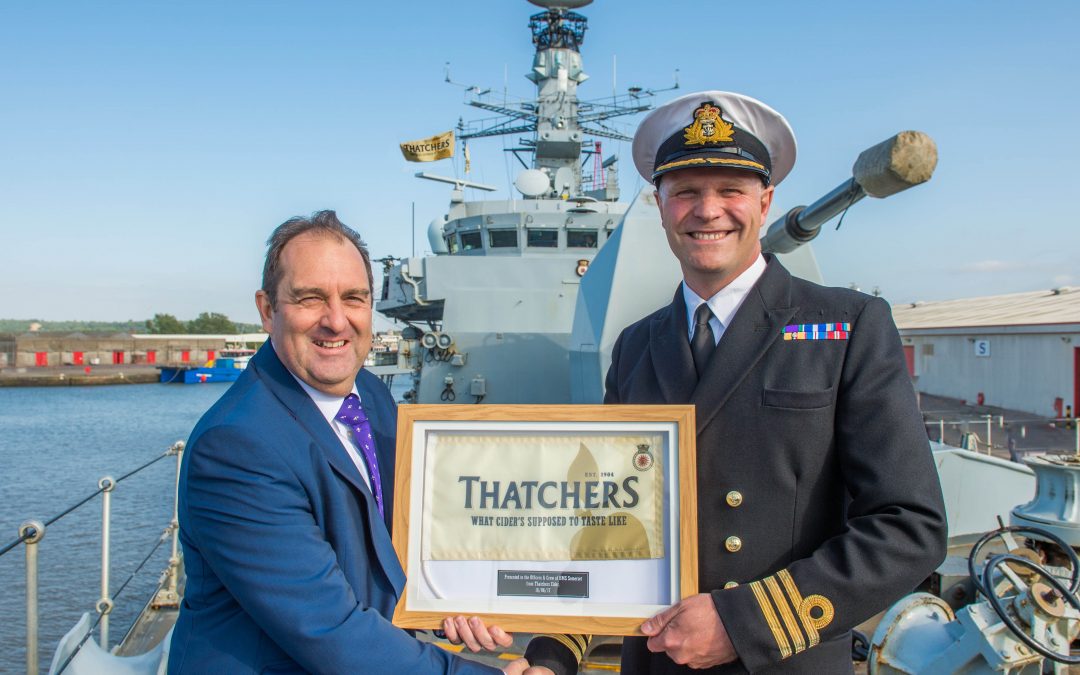 Thatchers Cider and HMS Somerset have teamed up to promote the county of Somerset and bring a few home comforts to everyone on board ship.

Chris Milton, Off-Trade & Export Sales Director at Thatchers Cider, presented a Thatchers branded “RAS” (replenish at sea) flag to Commander Tim Berry of HMS Somerset at a reception for 100 local dignitaries, while the ship was docked at Avonmouth.

Chris had met members of the crew at a Yeovil Town football match in February and in this social setting Commander Tim Berry asked if Thatchers would be prepared to make a RAS flag that the ship could fly when replenishing at sea, or in and out of selected ports.

Tim is Somerset born, bred and schooled having attended Richard Huish School in Taunton, his grandfather was a farmer in Chard and even made his own cider.  Tim is doing as much as he can as Captain of the ship named after his county of birth to promote it and he especially loves Thatchers Cider!

The Petty Officers mess has also been “Thatcherised” with glassware, drip mats and bar runners after 30 of the officers and crew including Tim came for a tour of Myrtle Farm, who confided that they were fascinated at the production process for our latest tipple Thatchers Haze.

Chris Milton says, “We have been absolutely delighted to team up with HMS Somerset and we hope that our relationship will flourish over coming months and years. We will be supporting the crew in the Royal Navy Beach Fires Rugby Tournament on the 19th July, with the Thatchers logo featuring on their shirts.

“We are proud to be on board HMS Somerset, and wish everyone safe travels.”

HMS Somerset was ordered in June 1994 and has her home at the Port of Devonport just west of Plymouth.

She is named after the Dukedom of Somerset and is the fourth ship named after the county to serve in the Royal Navy – the previous three were all in service in the 18th Century.