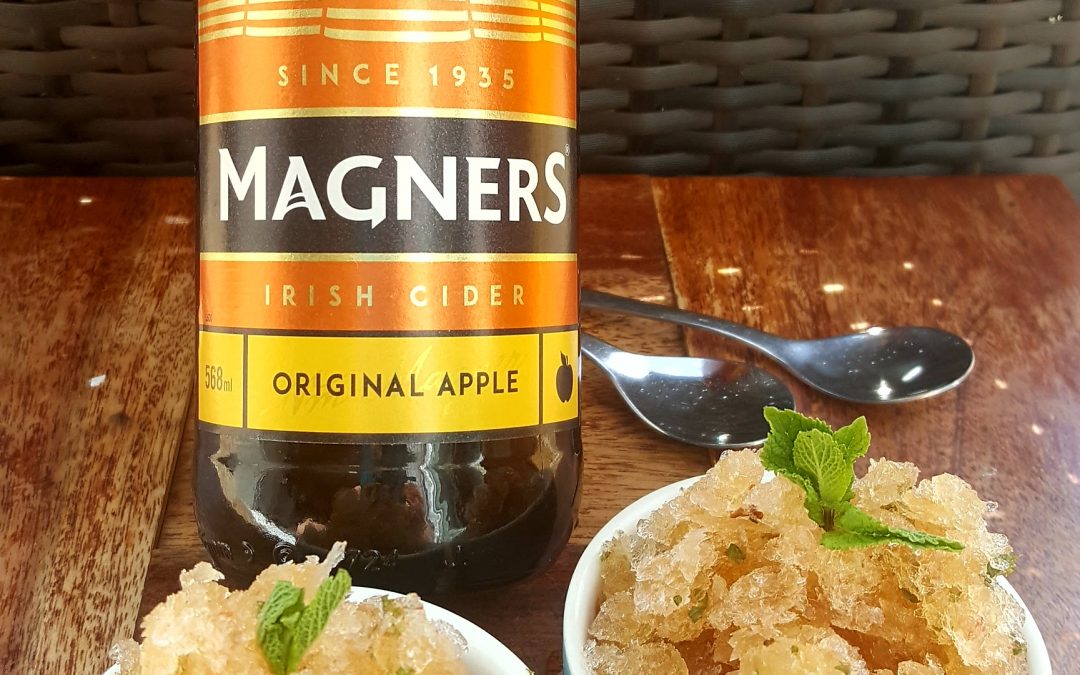 From The Fuss Free Foodie – watch the video here: https://youtu.be/PoGfLo38hmU.

Freezing does not reduce the alcohol content – for legal drinking age only!

Magners Irish Cider has today, 18 July 2018, been unveiled as the exclusive sponsor of the most prestigious Jump race in Europe, the Cheltenham Gold Cup and as Presenting Partner of The FestivalTM, staged annually in March at Cheltenham Racecourse, Prestbury Park, Gloucestershire.

The partnership between Jockey Club Racecourses and Magners Irish Cider, celebrates the brand’s Irish heritage by associating with the leading British and Irish-attended event in the UK, attracting crowds of over 260,000 annually, and watched by millions of horse racing fans across the world via TV and digital platforms.

The FestivalTM is the fourth biggest sporting event in the UK, in terms of the total number of visitors, and takes place over four days at the world famous Prestbury Park racecourse in Gloucestershire. In addition, The FestivalTM has broad and increasing appeal in Ireland, with approximately one third of tickets sold in 2018 going to Irish race-goers. The FestivalTM 2018 was another fruitful year for the Irish, with punters witnessing 17 Irish-trained winners during four days of competitive Jump racing.

From 2019 to 2022, this agreement means Jump racing’s showpiece event will become the ‘Magners Cheltenham Gold Cup’. The FestivalTM will now be referred to as ‘The FestivalTM, presented by Magners’.

The Cheltenham Gold Cup has a long and illustrious history and takes place at level weights over three and a quarter miles and 22 fences. Its victory roll features the finest staying chasers ever to grace the turf, including Arkle, Best Mate, Golden Miller, Kauto Star and Mill House. 2018 saw an epic renewal, with Native River seeing off the challenge of Might Bite in a thrilling championship contest.

Jason Ash, Chief Marketing Officer of C&C Group plc, said: “Magners Cider is 100% Irish, made in Clonmel, County Tipperary, where William Magner first started making cider over 80 years ago. Famous for our Irish heritage, sociability and positive view on life we are truly excited to put our name to the most prestigious Jump race in Europe and partner with one of the UK’s best sporting and social occasions as a platform to engage fans and bring Magners to a global audience.

Given The FestivalTM is a major occasion in the sporting calendar of racing fans across the world, especially in the UK and Ireland, we are delighted to be a part of such an iconic event. We see our partnership with The FestivalTM and the Magners Cheltenham Gold Cup as a perfect fit, providing a year-round platform to bring to life our new “100% Irish” positioning to consumers in the UK and internationally.

We look forward to working with The Jockey Club to engage horse racing fans across multiple platforms, including at The FestivalTM, in the On and Off-trades, and via advertising, digital and social activation”.

Ian Renton, Cheltenham and South West Regional Director for Jockey Club Racecourses, said: “To work with Magners over the next four years is something our whole team is hugely looking forward to. I believe this partnership with a brand of provenance and heritage like Magners will provide a big opportunity for both parties.

In the build-up to The FestivalTM each year, a third of the tickets purchased are by Irish race-goers, so we feel this partnership is a great fit and we’re delighted to be working alongside a partner with such a strong Irish heritage and appeal in the UK, Ireland and beyond.

As well as looking forward to staging the first Magners Cheltenham Gold Cup, 2019 will be the first time The FestivalTM has had a Presenting Partner to promote the whole event to an even wider audience.”

Stonegate Pub Company has been named the Corporate Charity Fundraiser of the Year by PubAid and the All-Party Parliamentary Beer Group (APPBG).

The Award was presented to Stonegate CEO, Simon Longbottom, at the annual APPBG Dinner in Westminster, in recognition of the company’s impressive commitment to charity support across its pubs and head office. Stonegate raises around £1.5 million for charity every year, supporting a wide range of worthy national and local causes.

Co-founder of PubAid, Des O’Flanagan said, “Everyone on the PubAid Steering Group was impressed by Stonegate’s support for charity.  Fundraising is seen not as a ‘nice to do’ add-on, but a fundamental part of running a Stonegate pub.

“Managers and their teams demonstrate huge creativity and dedication in their fundraising, which embraces a variety of activities, from Fun Days to fancy dress events, sporting challenges and larger, region-wide initiatives, such as the ‘Spartan Walk’, where 300 southern pubs raised £73,500 for Noah’s Ark Children’s Hospice. Head office are also active within their community in Luton, with ongoing support for the local children’s hospital.”

PubAid also highlighted Stonegate’s northern division’s mission to raise £60,000 for MIND and the Scottish Association for Mental Health. A whopping £45,000 has already been raised by the pubs and bars with a further £9,000 raised by the management and support team who trekked the gruelling Three Peaks. Fundraising continues until September so they are on track to hit the target.

On receiving the award Longbottom said, “It is an honour to receive this award in recognition of the tremendous amount of community fundraising and the phenomenal amount of money raised each year for charities large and small by our pubs and support team.”

Mike Wood, MP for Dudley South and Chairman of the All-Party Parliamentary Beer Group, said “Stonegate has shown what can be achieved when charity support is embedded within a company’s culture, with all employees empowered and enthused to do their bit to help.  Raising £1.5 million a year is a fantastic result and we are delighted to name them as the winner of our Corporate Charity Fundraiser award.”

As well as the Corporate Charity Fundraiser of the Year award, PubAid also recognises outstanding charity support by individual pubs with the Charity Fundraising Pub of the Year award. This award, supported by Magners, was presented for the first time earlier this year, with the Logan Rock in Treen, Cornwall, taking the winner’s title ahead of seven other pubs on a very strong shortlist.

The Corporate Charity Fundraiser award is in its fourth year. Previous winners are JD Wetherspoon, Greene King and Joseph Holt.

The Heritage of Orchards and Cider Making in Wales

The Heritage of Orchards and Cider Making in Wales was funded by the Heritage Lottery Fund and run by the Welsh Perry & Cider Society in partnership with the University of South Wales-based (USW) George Ewart Evans Centre for Storytelling.

This two-year project worked to identify varieties of cider apples and perry-making pears. A tour to explain the findings is starting a tour of venues across Wales.

The project had three strands; working with community orchards across Wales, researching Heritage Welsh Cider apples and Perry Pears trees; while USW worked on capturing the Modern Story of Cider Making in Wales.

It also worked with 13 community groups across Wales to regenerate old orchards and/or plant new apple and pear trees.

During the work, cider and perry varieties were planted, while the community groups managing the sites were supported with skills to maintain and develop the biodiversity of the site. They were also given traditional orchard management skills to pass on to new volunteers and future generations.

The project identified and re-discovered a total of 99 Welsh varieties (39 apples and 60 pears), these were found all over Wales. This was achieved by DNA testing samples and then comparing the results to Brogdale’s National Fruit Collection database.

Where possible, the unique trees were propagated from graftwood, to create National Collections of Welsh cider & Perry trees.

These are being hosted at Abersytwth University, IBERS campus and two National Trust properties; Erddig Hall & Dyffryn Gardens. A forth one – the Society’s own Museum orchard –  is split over two sites, one in Llanarth and one just outside of Usk. These will all hold two of each variety, acting as a genetic resource to ensure the preservation of these varieties as a valuable part of Welsh natural heritage.

Juice from the fruit was fermented in single-variety trials. Information will be shared in an online catalogue of ‘Welsh Heritage Cider and Perry Fruit Varieties’.

​Catrin James, of the George Ewart Evans Centre for Storytelling, explained the success of the project.

“By travelling the length and width of Wales, a digital archive was created to capture the modern tradition of orchards and cider making in Wales,” she said.

“The archive is a collection of oral histories and digital stories, including interviews recorded with cider and perry producers, community orchard groups, heritage organisations and individuals involved in orcharding and producing Welsh cider and perry.”

Richard Bellamy, Head of the Heritage Lottery Fund in Wales, said: “The Heritage of Orchards and Cider Making in Wales was a truly unique project, using National Lottery funding to uncover some amazing fruit varieties that had long since been forgotten about. This work is not only fascinating with a great story to tell, but potentially really important for the British food and drink industry too. Thank you National Lottery players for giving us a sweet start to Spring!”

The collection is available online at The Welsh Perry & Cider Society website and is archived in the collections of The People’s Collection Wales and St Fagans National History Museum. This element of the project was delivered by the George Ewart Evans Centre for Storytelling at the University of South Wales.

Further information about all three areas of work may be found on the Welsh Perry & Cider Society’s website – www.welshcider.co.uk

Devon cider makers Sandford Orchards unveiled their new Fine Cider Range today, involving a pioneering new technique which has its roots both in winemaking and ancient cider production.  Sandford Orchards’ new single variety Yarlington Mill cider is produced using ‘on leaf’ fermentation, a concept inspired by whole-bunch fermentation found in modern winemaking. This is the first time this method of fermentation has been used to produce a cider.

The idea of adding fresh apple leaves to fermentation first came to Barny Butterfield, owner of Sandford Orchards, after reading yeast trial results from the 1900s. Building on the concept, Barny added fresh apple leaves from a Sweet Alford tree to a batch of single variety Yarlington Mill juice at harvest.  “I wanted to see if the leaves had an impact on the aromatics of the juice, as hinted in the trial results” explained Barny, “and we were blown away by the results.” Blind tastings of the juice have produced a wide range of comments pronouncing the juice “fresher and fruiter, with extra zing”.

To add strength to the findings Sandford Orchards called on their connections with the University of Exeter mycology department. Inspired by the taste findings, the team are currently working on profiling the metabolic pathway of the microbes present in the on-leaf fermentation, alongside other research including gene sequencing and microbiome comparison.  “We are delighted to be working alongside Sandford Orchards on this project” commented Dr Jane Usher, University of Exeter. “The on-leaf fermentation produces a profoundly more impressive bouquet with increased complexity and subtlety, I am optimistic that our research will help us to understand the reasons behind it”.

A small release of 100 cases of the first batch on Yarlington Mill – On-leaf is now available alongside Tremletts Bitter, Single Variety Cider, the second cider in Sandford Orchards’ Fine Cider Range, which uses natural yeasts found in the Cider Works, Sandford Orchards’ home, and a working cider works since 1932.

For more information please call Barny Butterfield on  07961 148593 or email Charlotte on marketing@sandfordorchards.co.uk

Sandford Orchards are craft cider makers from the heart of Devon. The rich red, fertile soil of mid Devon and the unique micro-climate that comes from being nestled between two moors makes the perfect growing environment for cider apples, which is why they only use cider apples from within 30 miles of their press.