The specially created wildlife area, which will extend to approximately an acre in size, will run alongside the popular Strawberry Line cycle and footpath in Sandford, with family-run cider maker Thatchers hoping it will make a real contribution to the local environment and the biodiversity of the area.

Two areas of coppice woodland will border a central grassland plateau. Planting of 169 trees and hedges includes native species such as hawthorn and hazel, English oak and field maple, together with more planting of grasses and nectar-rich wildflowers. This planting will help create sheltered micro-habitats, and will aid the important retention of a dark corridor for bats and other wildlife.

A special group of ten trees along The Strawberry Line has been planted and dedicated to the Queens Green Canopy campaign, celebrating the Platinum Jubilee in 2022.

With its 500 acres of Somerset apple orchard, Thatchers is already home to a diverse habitat, and at Myrtle Farm has recorded 13 species of bat, as well as birds which are on the BOCC (Birds of Conservation Concern) Red and Amber lists, including house sparrow and redwing, grey wagtail and mistle thrush. It is hoped that the new conservation area will become a familiar home to many of these species, with the trees and plants selected to create a protected and foraging-rich haven.

“It’s important to us to maintain the biodiversity of our site here at Myrtle Farm,” says Gary Delafield, Operations Director at Thatchers. “As a cider maker rooted in the rural community, we’ve always been surrounded by trees and farmland, and recognise the role that a biodiverse environment plays. Myrtle Farm is already a very vibrant place for wildlife, and with this new conservation area, we’ll be increasing its biodiversity by over 85%.”

The habitat is expected provide a picturesque and interesting stop off point along the Strawberry Line, which is designated as a public footpath running alongside Myrtle Farm.

Thatchers has been working closely with the Avon Wildlife Trust in creating the area, together with arboricultural consultancy Cambium.

Fifth generation cider maker Eleanor Thatcher has been closely involved in the planning of the conservation area.

“Myrtle Farm is where I’ve grown up, and I’ve been used to seeing animals such as deer and hare in the orchards from an early age. It’s so important for us to encourage wildlife at Myrtle Farm,” she says. “This new conservation area will bring the wildlife right into the heart of Myrtle Farm, and we can’t wait to see which visitors will be the first to arrive in the Spring.”

Thatchers and the Avon Wildlife Trust will be erecting information boards alongside the conservation area, featuring more detail about the planting and resident wildlife.

Eleanor concludes, “We are no strangers to planting trees – in fact over the last decade Thatchers has planted some 158,000 apple trees in our orchards. And in 2022 we’re continuing to donate hundreds of apple trees to organisations and charities taking part in our Community Orchard Project. Our orchards are already havens for wildlife, but this conservation area is extra special, creating a new protected habitat for birds, animals and insects here at Myrtle Farm.”

A Celebration of Apple Harvest at Middle Farm

The Cider Barn at Middle Farm is a cider-lover’s dream with established favourites and regular new introductions.

Director of Middle Farm, Rod Marsh, says, “Autumn brings the apple harvest when we celebrate our national fruit in all its manifestations!”

“We’re proud to offer an ever-evolving range of ciders and perries in our Cider Barn. New this month five ciders from Wilding Cider, lovingly crafted by Sam and Beccy Leach on their 4.5-acre smallholding in Somerset, and the latest releases from Albert Johnson of Ross on Wye Cider and Perry’s including his collaboration with the Queer Brewing Project – Dancing Required”

The Celts are thought to have brought cider making to these islands. Some 5,000 years later, half of all the apples grown in the U.K. are used to make cider for the largest cider market in the world. The varieties of apples used, natural or cultured yeasts and an individual makers’ process all create a distinctly unique and characterful finish, as do the whisky, oak and port barrels sometimes used for maturation.

Middle Farm sells straight from the cask, affording visitors the unique opportunity to taste and compare before they buy.

As the nights draw in and the temperatures drop, the change of season is welcomed with steaming hot mulled cider, a perennial favourite, to enjoy whilst you shop, or to take home in a container.

Apples from local orchards are hand-pressed for fresh juice daily and, by appointment, customers can bring their own fruit to have it pressed every day of the week. There are also between forty and fifty bottled varietal apple juices made by local growers– a flavour for every palate.

Apple-based drinks aren’t the only thing on offer. “Every year we celebrate the unparalleled diversity of our national fruit with as big an array of freshly-picked apple and pear varieties as we can fit in our farm shop. From now until after Christmas there will be upwards of twenty varieties to delight our customers, some from our own farmhouse orchard, but all from within a thirty-mile radius, sourced from low-input, often organic, sustainable orchards.”

Nestling at the foot of Firle Beacon on the South Downs in Sussex, Middle Farm is a 625 acre working family farm.  Six generations of farming have given us a unique insight into British food production. The highest standards of animal welfare and environmental care show in our farm produce. We demand those same high standards from everyone whose produce we stock. 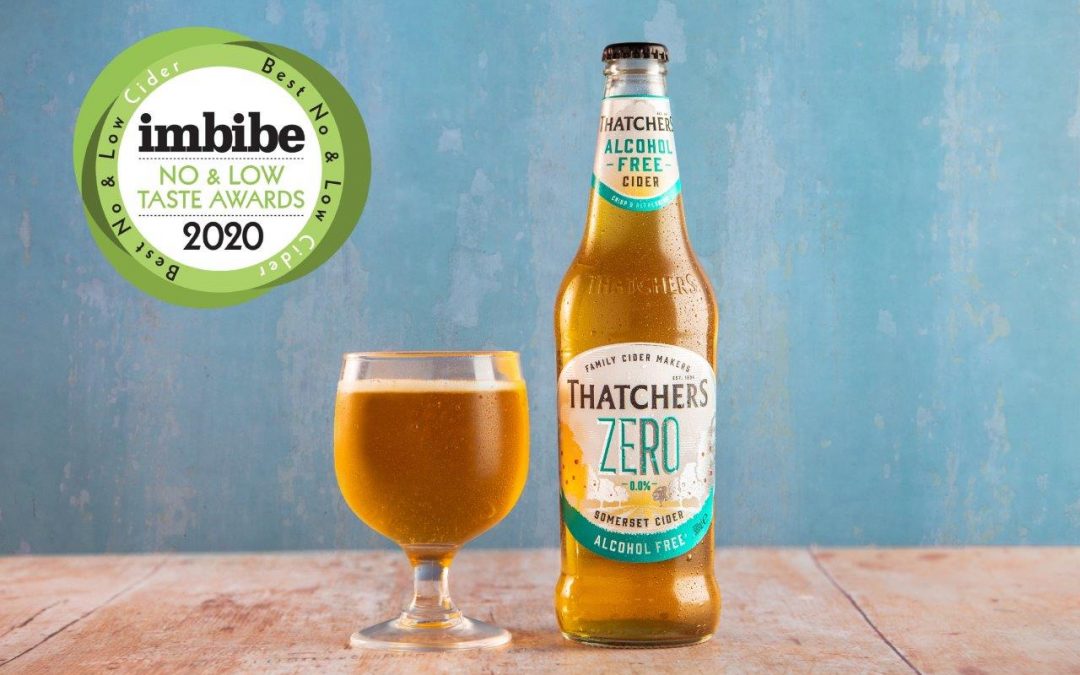 It was two years in the making, but now Thatchers Zero, the Somerset cider maker’s first alcohol-free cider, has been named Best No and Low Cider in the UK by industry magazine Imbibe.

Thatchers Zero was unveiled in January 2020 after a long development journey, and only when the cider maker was 100% happy with the cider’s taste, depth and appearance. By using a unique production process, Thatchers has been able to create an alcohol-free cider that doesn’t compromise on quality – and offers the premium experience people are looking for when enjoying a Thatchers cider.

Thatchers Zero is full of appley aromas and crisp refreshment. With a beautifully bright, golden appearance, crisp, medium dry taste, and fruity aroma, it is crafted using a selection of Thatchers favourite bittersweet apple varieties, creating a 0.0% cider with body, smoothness and character.

The Imbibe No and Low Taste Awards were launched to reflect the quality and range of products in what has become a significant sector of the drinks industry in recent times – one that has grown during lockdown and is predicted to continue to grow in the years to come.

Like all other ciders in its range, Thatchers Zero is gluten free and is suitable for vegetarians and vegans.