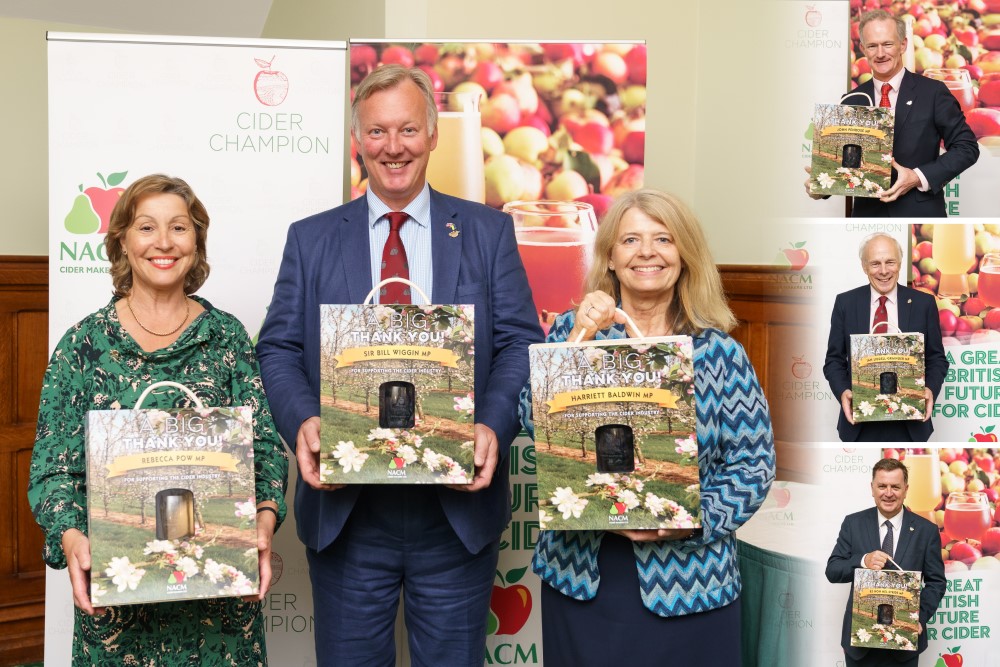 After being given a tour of the orchards and learning more about the cider industry, Harriett listened to concerns about cider makers’ tanks remaining largely blocked with the 2019 and 2020 harvests, which may need to be destroyed to make way for this year’s apple harvest. Worse still, was the fear that without support, decades old cider apple orchards may vanish from the countryside. The impacts of the numerous COVID lockdowns, pubs, bars shut and cancelled festivals over the last 12 months, has left some apple growers and cider makers in a perilous position.

“Cider makers are asking for much needed support to allow them to recover from the impact of COVID and for the government to keep their pledge to reduce red tape for business.” said Mark Hopper NACM “The Treasury review into how cider and other alcoholic beverages are taxed is an opportunity to provide much needed support for our industry, but cider makers are concerned about more complexity and added cost.”

Bruce Starkey said “Cider apple orchards add huge value to communities, they are great for sustainability, contributing to biodiversity and of course trees are beneficial in terms of carbon. However, they are also dependent on a strong cider market and if we can’t sell the apples then we can’t afford to grow the tree.”

Geoff Thompson said “the last 12 months have been extremely challenging but there have been some positives such as strengthening the relationships we have with our local community. We look forward to pubs, festivals and whole hospitality sector re-opening this summer.”

Speaking after the visit, Harriett Baldwin, MP for West Worcestershire commented, ”Cider is a very important local product with apple trees all over the county producing some of the best ciders in the world. It was really helpful to meet with Bruce and Sarah at Commonwood Farm to hear of the challenges they are facing and the requests they would like me to pass back to the Government.”

“I’ve already raised taxation issues with the Chancellor and I also met with DEFRA last week to talk about specific support measures for the industry and I have passed that guidance on.”

“We are all hoping that the weather is now set fair as the apple trees blossom and we all hope for a bumper crop this autumn.”