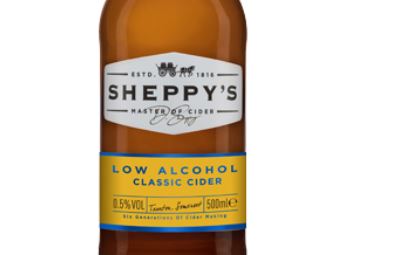 Leading the way in the craft cider category, Sheppy’s are launching their new Low Alcohol Classic Cider at Imbibe Live! on stand E41 from 2-3 July 2018. The low alcohol sector is booming. Sales grew by nearly 30% last year and the sector is set to be worth £300 million within ten years and will account for 5% of the beer and cider market. With only 0.5% ABV, this traditional, classic cider remains true to Sheppy’s cider making heritage and methods with a lower alcohol content to meet today’s changing consumer lifestyle choice.

Keeping it real
A beautifully light and crisp low alcohol cider with a refreshing apple taste. Sheppy’s Low Alcohol Classic Cider has all the same flavour profile of their traditional cider, but with less alcohol. It is made with a carefully selected blend of Somerset’s finest traditional and dessert cider apples – and is just as enjoyable as Sheppy’s award winning Classic Draught Cider.

Bang on trend
With over three million Brits interested in taking part in ‘Dry January’ this year, it’s no secret that millennials are thinking more about what they put in their bodies. They are drinking less in terms of quantity and more in terms of quality. Discerning drinkers want to know where their food and drink is from, what’s in it, how it’s made and the heritage and provenance of a brand. Sheppy’s real cider meets these needs. Each of Sheppy’s cider variants are made by the Master of Cider himself, David Sheppy, using methods, knowledge and expertise handed down over six generations.

David Sheppy comments: “We spotted the growing trend for low alcohol as consumers’ lifestyle choices are changing. People like to enjoy a drink or two but are looking for options with lower alcohol – that still taste great and are made well. Our new cider offers all our craft credentials; flavour and excellent quality, with a lower ABV. I have spent a lot of time perfecting this recipe to ensure that it stays true to our traditional craft cider roots. The team are thrilled with the result and are looking forward to sharing it with visitors at Imbibe Live!”

Real cider takes time. 200 years
Real cider, real knowledge and real heritage. Today, sixth generation Master of Cider, David Sheppy, is at the helm of this 200-year-old family business. His passion, knowledge and expertise are behind every drop of Sheppy’s cider. With over 90 acres of organic cider orchard, some of which are over 100 years old, the Sheppy’s cider farm is where David grows 30 varieties of the finest Somerset cider apples. He continues to champion the same traditional methods, using rare crafting skills to produce the Sheppy’s range of award winning and world class premium ciders.