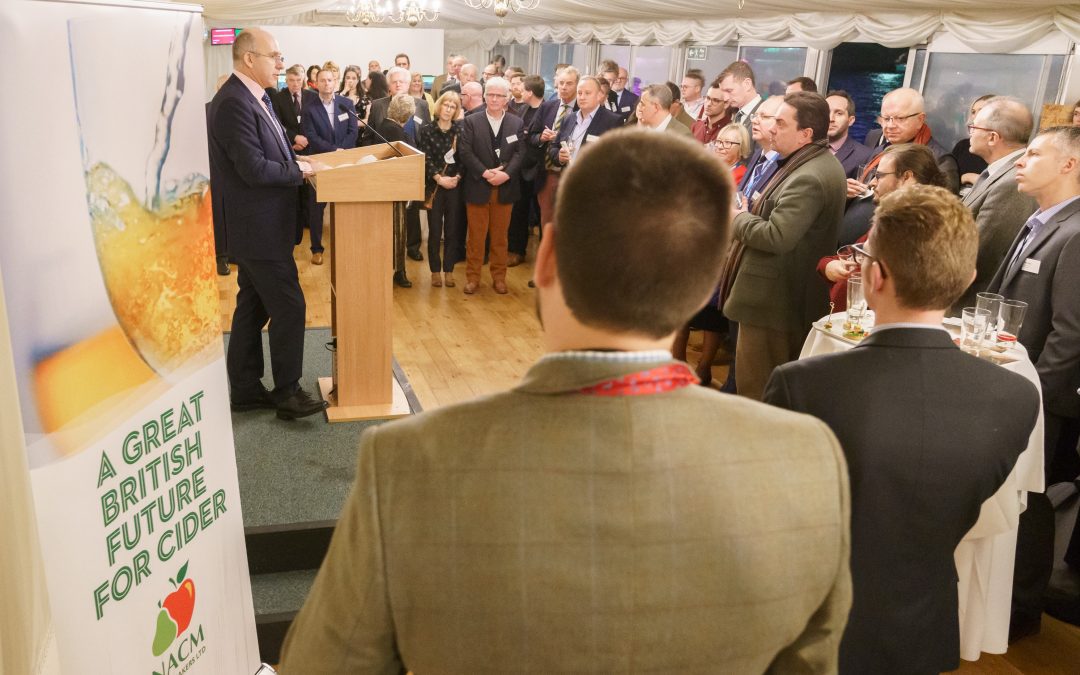 The reception, held on in the terrace marquee at Westminster and hosted by the All Party Parliamentary Cider Group saw more than 100 cider makers, apple growers and others connected to the cider industry, gather together to talk to MPs and officials.  Opening the evening, Ian Liddell-Grainger, chair of the APPCG, held aloft a cider apple as a reminder of just how important cider making is to rural communities and farming.

Gordon Johncox, Chair of the National Association of Cider Makers and CEO of Aston Manor, spoke on behalf of the industry, highlighting the issues faced by those making cider and growing cider apples.  The association is celebrating its centenary this year and he looked back on the highs and lows of the last 100 years.

Gordon explained “The cider market is shrinking at extraordinary rates over the last decade.  The decline has been faster and more damaging than any in recent history we are under no illusion that if immediate action is not taken then the situation will deteriorate.  This Christmas was one of the worst we have experienced and whilst I recognise that alcohol sales in general were just over 1% worse than last year, cider rate of decline was over 5% and the trend is continuing to deteriorate.”  The industry is calling for a 2p per pint reduction in excise duty in the Spring Budget, Gordon continued,  “The current relationship between cider excise duty and other categories is out of step and has contributed to a 27% decline in volume over the last decade.  We urgently need excise duty to be reduced and realigned”.

Gordon shared more about the close working relationship between cider apple growers and cider makers, explaining that the apple is at the heart of cider making and that most cider makers rely on the strong relationship that they have built with local farmers, who grow apples for them across 18,000 acres of orchards.  The market decline is now impacting these farmers and last year around 1,000 acres of orchards were lost as demand fell.

Whilst the market picture was far from cheerful, the mood in the room was optimistic as cider makers from around the country talked to MPs and officials whilst they sampled the tremendous range of ciders on display, all made from the simple apple.

Highlighting the need for a review of regulations impacting the cider industry, Gordon explained that moving out of the EU provides a once in a generation opportunity to shape the regulatory environment to better support our food and drink businesses, and to support farming and provided two examples that would contribute to future industry success.  Small cider makers excise relief is outdated and hampering growth, whilst Fruit Ciders which have been around for hundreds of years, are treated as wine rather than cider.

The start of a new decade is a time for optimism, and celebrating the wonders of apple growing, cider making and rural life.  Gordon concluded “We hope that along with a great harvest, that this year will also see good fortune return to the cider market. We are asking for support, to turn cider back into a success story, support that will enable our cider makers to innovate and encourage more interest in our category, contribute to local employment, tourism and of course farming”.